Example of a Press Release

Example of a Press Release

This text was independently written, edited and translated by me. Click here to view the report on the original website.

11.07.2012 | Potsdam: At the end of her first trip to Indonesia, the Federal Chancellor Angela Merkel visited the tsunami warning center in Jakarta on Wednesday, 11 July 2012. “I am very impressed with the tsunami warning centre,” said Mrs. Merkel during the visit. “It’s a very good example of a German-Indonesian cooperation, which really works for the benefit of the people.”

The devastating degree of damage by the tsunami on 26 December 2004 was mainly due to the lack of precaution in the Indian Ocean for such a natural disaster. Immediately after the incident the Federal Government commissioned the Helmholtz Association of German Research Centres, represented by the GFZ German Research Centre for Geosciences, to develop and implement an early warning system for tsunamis in the Indian Ocean. The funds totaling 55 million euros derived largely from the contribution of the Federal Government as part of the aid for flood victims. The project was funded as a research project by the Federal Ministry for Education and Research (BMBF) and conducted in collaboration with the Indonesian Ministry of Science (RISTEK) and responsible authorities.

Mrs. Merkel praised the successful implementation of the GITEWS concept: “You can see the highest scientific quality. Indonesian workers are trained here and have the opportunity to participate in the scientific development that Germany can offer. To that extent this is a prime example of cooperation, which of course also includes funds for development aid and technical cooperation. I believe the money is put to very good use.” The geological situation in Indonesia with an extremely short time between an earthquake and the arrival of a tsunami on the coast required an entirely new approach to the design of the tsunami early warning. The interaction of 300 land-based sensor systems, a rapid and accurate determination of earthquake parameters with SeisComP3 (the seismological analysis system developed at GFZ) GPS stations and tide gauges should provide an early warning of under five minutes. In November 2008, GITEWS (German Indonesian Tsunami Early Warning System) was operative. In the subsequent phase, GITEWS was optimized jointly. The early warning system successfully demonstrated its functionality several times, most recently during the extreme earthquake on 11 April 2012 in Sumatra.

On 29 March 2011, six years after the tsunami disaster in the Indian Ocean, the GITEWS project ended as planned and was handed over to Indonesia. “That does not mean that we will withdraw from the system now. In particular, Germany continues to support the operation with the sustainable education and training of staff of the warning centre operator BMKG“, said Professor Reinhard Huettl, Chairman of the GFZ German Research Centre for Geosciences (Helmholtz Association).

Next to Professor Huettl, GITEWS project leader and current director of the geo-engineering research centers and platforms at the GFZ, Dr. Jörn Lauterjung, was also on the ground to receive the Chancellor. He concurred that the GFZ will continue to play a crucial role even after the handover to Indonesia. Besides the technical structure, scientists, disaster managers, administrative staff and the people are trained in procedures in case of strong earthquakes and tsunami and what preventive measures can be taken. In three test regions (Padang, Sumatra; Cilacap, South Java; Kuta / Sanur, Bali) the sequence of a tsunami warning up to the evacuation of the coastline is practiced. In addition, Indonesia’s earthquake service BMKG developed alarm plans for the entire country.

This part of the follow-up concept for GITEWS is called PROTECTS (Project for Training, Education and Consulting for Tsunami Early Warning System) and will continue until the end of March 2014. “Together with the newly formed Indonesian disaster management authority BNPB, the procedures that are being developed in the test regions will be carried nationwide in cooperation with the Indonesian Academy of Sciences, LIPI” explains Dr. Lauterjung. His management performance has been recognized by the German Association for Project Management by awarding him the Roland Gutsch Project Management Awards 2009. 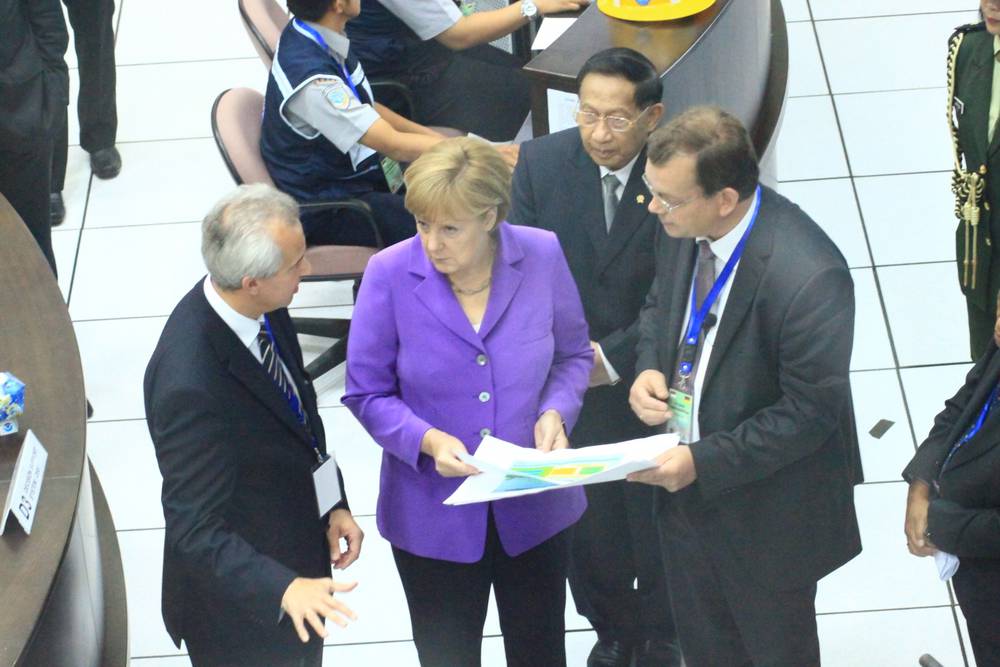